Sweeteners On The Kaufmann Diet 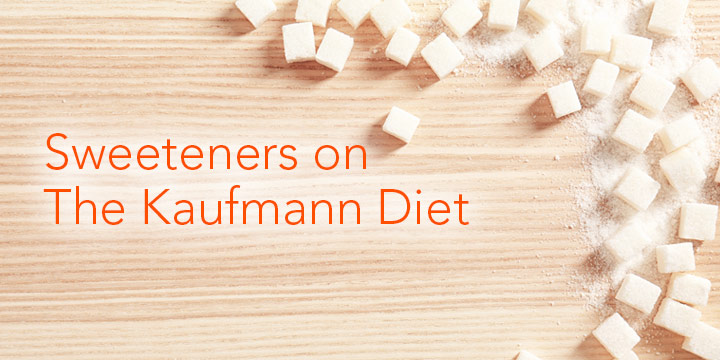 It is no secret that Americans have a sweet tooth; on average, it is assumed that we consume over 100lbs of added sugar per person every year! Unfortunately, we have seen the effect this has had on our health, over all. The majority of Americans are considered overweight, with many of those considered obese. Subsequently, many chronic diseases, like heart disease, diabetes and cancer, are rampant.

Certainly, all these diseases are not due solely to our sugar intake, but we do know from the medical literature that consuming added sugars does contribute to health problems. It is no wonder that most diets that aim to promote health eliminate sugar, particularly added sugar. The Kaufmann Diet is no exception, but the motivation for eliminating sugar is likely slightly unique from other diets.

Sugar is known to be fungi and yeast’s preferred food of choice. If someone is suffering from an underlying yeast infection, a diet rich in sugar would do nothing but exacerbate such an infection. Subsequently, it is thought that these types of infections might illicit downstream health problems, which often include odd and difficult to diagnose health problems. Often, however, after people follow The Kaufmann Diet for a period of time, they experience relief from health problems that have plagued them for years.

Because sugar is so addictive, it can be among the most difficult things to give up on The Kaufmann Diet. So many people ask, what sweeteners are ok?

Sugar itself, of course, in all it’s forms, is eliminated. This includes sugar, sucrose, sugar in the raw, cane sugar, brown sugar, powdered sugar and ingredients like evaporated cane juice. Also, anything with added added sugar is eliminated from the diet. This includes processed foods or anything including sugar on the label. Also, corn syrup, high fructose corn syrup, and fructose are eliminated, as well.

What About Honey And “Natural” Sugars?

While some types of honey do have some health benefits, the risk of including so much sugar in the diet, at least initially, outweighs any of those health benefits. Similarly, maple syrup, agave syrup and ingredients like coconut sugar are eliminated as well. On Kaufmann 2, you are allowed to reintroduce very minimal amounts of honey and maple syrup, but these should be enjoyed in extreme moderation.

What About My Sweet Tooth?

While The Kaufman Diet’s main focus is to eliminate yeast and fungi, part of the diet’s motivation is to break addictions to foods that might be causing health problems. Sugar is among the most addictive foods in the diet, so it is preferred that you avoid sweet foods for the most part. However, there are two sweeteners that are allowed that can hopefully help get you over the “hump” of sugar addiction. These are stevia and xylitol. Stevia is a no-calorie herbal sweetener available in powder and liquid form. Xylitol is derived from birch tree bark. Either are permitted on Kaufmann 1 or Kaufmann 2, but should be enjoyed in moderation.

Why is Sugar So Bad?

PrevPreviousYour Simple Anti-Aging Protocol
NextSurviving The Holidays On Kaufmann 1Next