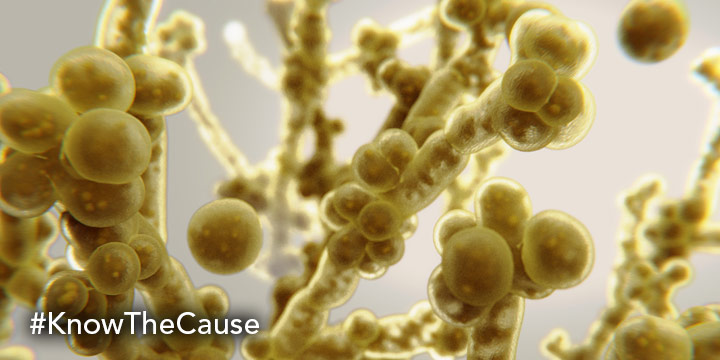 While the latest super bug is terrifying, perhaps this will wake the scientific community up to how dangerous fungi are.

Many people are familiar with antibiotic resistant bacteria, such methicillin resistant staph infections (MRSa) and how deadly these infections can be. Ultimately, we are discovering that what was long thought of as a silver bullet––the antibiotic––has a much darker side. Many dangerous infections that are very difficult to treat and heal have arisen largely as a result of our overuse of these drugs. These are often called “super bugs”.

The latest super bug, however, is not a bacteria at all, but a fungus. Earlier this year, the fungus known as Candida auris alarmed scientists as over 600 cases were reported throughout the US. In as many as 1/3 of these cases, the infection proved fatal. Candida auris is resistant to all the classes of prescription anti-fungal drugs, and alarmingly, Candida auris is difficult for doctors to distinguish between more common yeasts like Candida albicans. The fungus was observed not just in the US, but has been observed on every continent but Antarctica.

Candida auris can live on the skin and cause no infection there, but once it gains access to the bloodstream, it can infect the blood and disseminate to the heart and brain. Infection has only observed in hospital settings in the US, and doctors insist that those with weakened immune systems, those with feeding tubes or those who have taken lots of antibiotics are the people that are most at risk for infection.

Of course, those who take lots of antibiotics are those that are typically vulnerable to fungal infections, according to The Fungus Link to Disease theory. Antibiotics are, themselves, poisonous fungal byproducts, and while sometimes necessary, their use can sometimes precede a fungal infection, even in otherwise healthy people. Most doctors do not typically recognize this as true (except for superficial cases of yeast infections), yet in the case of Candida auris, they readily admit that antibiotics can make one more vulnerable to Candida auris. What gives?

Ultimately, most doctors readily admit that immunocompromised people are at risk for developing fungal infections, even potentially fatal ones. What they do not admit is that perhaps many of us––by nature of our diet, lifestyles and exposures––might have some level of compromised immune  systems that perhaps render us vulnerable to fungal infection. Poor diet, exposure to poisons in our food and medicines (i.e., mycotoxins and antibiotics) and sedentary lifestyle might be setting many people up to be vulnerable to fungus, even common fungi like Candida albicans. These infections often start in the gut (following antibiotic usage) and disseminate from there, causing hard to diagnose symptoms that are more than just superficial.

Fungus remains an elusive subject for medicine, largely because it is not taught heavily in medical schools. This particular case of a deadly, superbug fungus might be part of what wakes many up in mainstream medicine to the virulent dangers of fungi, and not just in cases of C. auris. There is much evidence that fungi may be complicit in many common health problems, including deadly problems like cancer and diabetes.

Thankfully, outside of a hospital setting, this fungus has not been observed in the US. If you must visit a hospital, make sure to wash your hands regularly, avoid touching most surfaces and carry bleach disinfecting wipes for when surfaces must be touched.