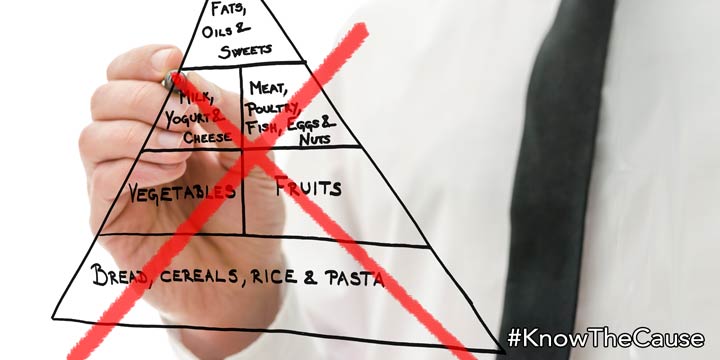 Our Official Recommendations Have Been Failing Us For Years

Everyone likely remembers learning about the food pyramid in grade school; it has been plastered on cartons of milk and cafeteria walls nationwide for years. The food pyramid was the official dietary recommendations put forth by the government and represented what we all assumed constituted a healthy diet.

The food pyramid rested on a foundation of grains, potatoes, and carbohydrates in the form of bread, pasta and rice. Behind that came vegetables, fruits, meats, dairy, and at the top laid sugars, fats, and oils, in sequentially lower servings, respectively.

We all likely would have continued thinking this was the healthiest way to eat, except for what has ultimately happened to the state of our collective health in America.

Today, we are sicker than ever before. Heart disease is rampant. In terms of numbers, cancer is not far behind as a cause of death. Diabetes is commonplace, as is obesity. All of these diseases can largely be linked to the way we eat.

The thing is, many Americans have eaten exactly how they were instructed, with diets rich in carbohydrates. In some part, the official recommended dietary guidelines are in part what has led to the state of American health.

Our knowledge of diet has greatly expanded in the last 50 years; research into diet and its connection to health has revealed that diet largely informs what kind of health we do––or do not––enjoy. Many of the mechanisms behind diet’s role in health remain clouded in uncertainty, but the Fungus Link theory to disease might shed some light here.

Pathogenic fungi, which remain largely ignored by mainstream science, thrive in an abundance of sugar and/or carbohydrates. The fungi can go on to influence the disease process in our bodies; pathogenic fungi have been linked to a variety of diseases, some as serious as diabetes, heart disease, and cancer.

Eating exactly as we have been recommended for years would likely do nothing but promote fungal proliferation in the body, and subsequent disease development.

Another example of how official nutritional recommendations have failed us likely included recommended low daily allowances (RDA) for certain nutrients, which lag far behind what science has revealed to us. Many of those values have remained unchanged since they were set in the early part of the 20th century with the sole intention of avoiding nutritional deficiencies and diseases like scurvy.

These values were not set with the intention of enjoying abundant health, merely avoiding grave deficiencies. How much have we learned about therapeutic doses of nutrients like vitamin C, beta-carotene, or B vitamins since? (Hint: A lot!)

Fortunately, the food pyramid has undergone some revisions in recent years. Still, there remains a heavy emphasis on grains, starches, and carbohydrates. This is in stark contrast to the evidence that carbohydrate-heavy diets may actually promote many kinds of disease.

Ideally, the food pyramid should rest on a foundation of fresh vegetables. Greens should be heavily encouraged.

Closely following vegetables should be lean, organic meats. These should include grass fed beef, bison, and lamb; free-range chicken and turkey; and wild-caught fish. Eggs should be included in this section as well.

Nuts, seeds and healthy fats, such as olive oil, macadamia nut oil, and coconut oil should come next.

Next would come low-sugar fruits, such as grapefruits, berries, green apples, avocados, and tomatoes. Foods like beans, sweet potatoes and a limited variety of non-yeast pseudo-grain products would follow.

At the very top––the section we are told to mostly avoid––we would see the majority of grain products. Excluded would be anything containing yeast, sugar, hydrogenated oils, or trans fats.

This is a rough outline of what the Kaufmann Diet looks like. This is a diet designed to eliminate many of the influencers of disease (such as sugar, processed foods, and foods high in carbohydrates), which also happen to be foods that would promote the growth of fungi in the body. This diet is in line with what much of the science says about which foods promote, and which foods detract from health.