Some Reasons To Avoid Sucralose 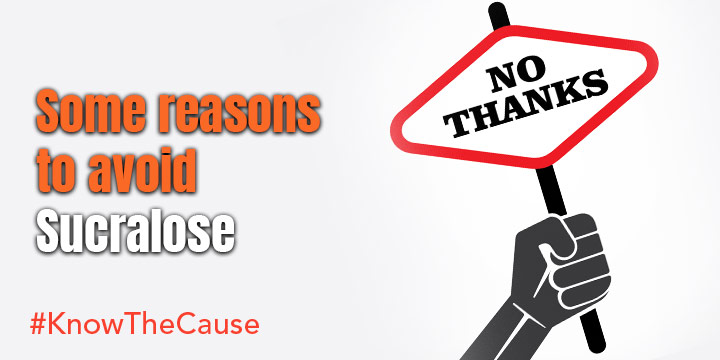 The Kaufmann Diet eliminates sugar in all its forms, of which there are many and sucralose is not on the Kaufmann 1 Diet. Sugar, or sucrose, is in many types of processed and prepackaged foods; reading the labels of most processed foods will usually reveal sugar, and in greater quantities than you would assume.

But it is not always simply listed as sugar. Sugar comes in the form of fructose, high fructose corn syrup, corn syrup, cane juice, evaporated cane juice, coconut sugar, date syrup––these are just a few of the ways that sugar is designated on labels. Even products like agave and honey are high in sugar and should be avoided, particularly on Kaufmann One.

There are a myriad of other products––sugar substitutes––that are low or no calories alternative sweeteners. Some of these are permitted on the Kaufmann Diet, including xylitol and stevia. Others, like Sucralose, are not permitted.

Sucralose, often branded as Splenda, is an artificial sweetener. It was discovered during research for insecticides, which should likely be the first red flag. It was originally added into diabetic products to reduce the amount of sugar therein, making those products safer or healthier for diabetics, ostensibly. Sucralose, however, has also been shown to raise blood sugar and insulin––two things it was purportedly used for in the interest of preventing those things.

There are some side effects to Splenda, which are obviously less-touted. These include migraines, agitation, numbness, dizziness, diarrhea, swelling, muscle aches, stomach cramps, and bladder problems.

The problems with Sucralose don’t stop there. It is also thought to be a xenoestrogen––or a substance that mimics estrogen and can block estrogen receptors. These can have health consequences in men and women. As a comparison, some mycotoxins, or mold poisons––the substances the Kaufmann Diet is designed to eliminate––are also xenoestrogens. The effects of xenoestrogen exposure can lead to unwanted side effects in men, such as breast growth and erectile dysfunction. In women, it is thought these increase the risk for cardiovascular disease.

Finally, Sucralose has shown to negatively affect the gut biome; in other words, it can harm the beneficial bacterial colonies in the gut. Keeping these colonies healthy is extremely important on The Kaufmann Diet; when these bacteria are damaged, this gives yeasts a chance to flourish, overgrow, and spread though the body, causing health problems. So in a roundabout way, Sucralose might actually encourage fungal growth more than prevent it.

Everyone should likely avoid Sucralose altogether, but for those on The Kaufman Diet, it is certainly something you want to avoid. While on the diet, stick to stevia and xylitol.

Your Brain & Giving Up Sugar

PrevPreviousThe Simplicity Of The Kaufmann Diet
Next5 Rules For LongevityNext