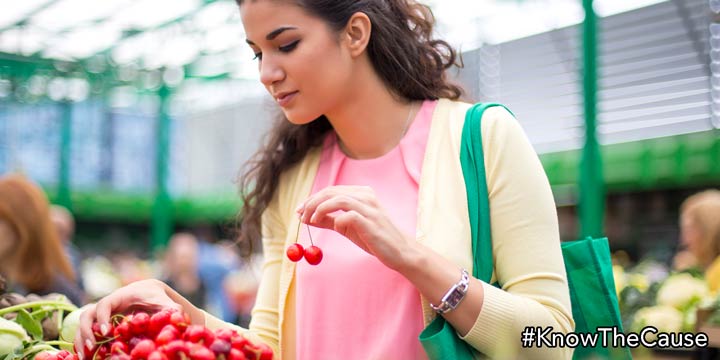 Certain Produce Should Always Be Organic: Here’s Why

While you are on the Kaufmann 1 or Kaufmann 2 Diet, it is important to incorporate a wide variety of fresh vegetables and certain fruits into your regimen. Simply put, these foods are where you will find an abundance of nutrients necessary for maintaining––or regaining––optimal health. In addition to the wide spectrum of vitamins and minerals, plant foods can constitute a good source of protein, healthy fat, complex carbohydrates, and––very importantly––fiber.

All produce, however, is not necessarily created equal.

Following World War II, much of the infrastructure and production utilized for the war effort was repurposed for use domestically. Ammonium nitrate, used for munitions, repurposed as a source of nitrogen––a key element that keeps the soil fertile. DDT, which had been used to control insects around the troops, was repurposed as a general pesticide.

During the 60s and 70s, however, people began to take note of some of the ill effects of our wanton usage of chemicals like DDT. In 1962, scientist Rachel Carlson published a book called Silent Spring, chronicling the side effects of DDT; this book is credited with influencing the banning off DDT by the US government in 1972, and also with spurring the environmental movement.

Organic farming grew out of this same movement. People simply began thinking more about how their food was grown and what ultimately ended up on their plates and in their bodies.

Fast forward to today, and organic farming constitutes a competitive part of the greater agriculture economy in the United States.

If you are searching for organic produce (or any sort of organic food), it is critical to find food bearing the USDA Organic label. Food given this label must meet certain standards in order to receive the designation of organic; it is the only way to know that what you are getting is, in fact, organic.

Buying organic food is important for a variety of reasons. There has been quite a bit of debate over whether organic produce contains more nutrition, with varying results. In short, non-organic produce still contains a wide variety of health benefits, and it is not necessary to buy organic produce to eat a healthy diet.

But, this is not the only important part of the debate over whether buying organic food is important.

First, certain pesticides have been shown to be carcinogenic, such as glyphosate. This and other pesticides are regularly used on a wide variety of plants that find their way into the supermarket via the fruits and vegetables this pesticide is used on.

Of course, industry tries to downplay this, and has fought tooth and nail to prevent not only the labeling of these substances as carcinogenic, but prevent banning their usage, as well. (Other countries, on the other hand, are far more progressive in this regard, which should likely serve as a warning to us.)

Buying organic produce, however, is the best way to avoid the majority of these harmful chemicals.

Second, any food that has been genetically modified cannot be labeled organic.

The idea of eating organic seems like a great idea, but it is not always possible. Sometimes, organic produce might not be available, and often when it is, it can be cost-preventative.

Ultimately, eating vegetables and fruits, regardless of whether they are organic or not, confers numerous health benefits.

For some specific vegetables and fruits, however, it is more important to look for organic. In certain cases, pesticides can leach into certain foods, making them impossible to wash or scrub off. (You should always wash produce regardless of whether it is organic or not.)

Below are some fruits and vegetables you should always try to find organic varieties of, whenever possible.

Alternatively, there are some vegetables and fruits that are not as important find in organic varieties:

*All of these foods are on either Kaufmann 1 or Kaufmann 2.