Do Eggs Cause Cancer? 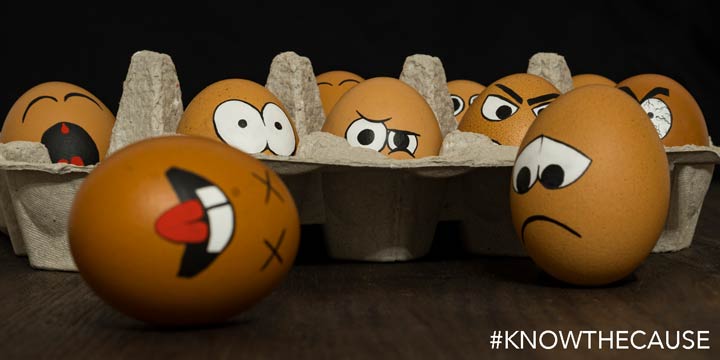 Some advocates try to paint eggs in an unhealthy light, which is not a new trend.

There are, perhaps, fewer more maligned foods than the incredible, edible egg. For years, eggs were demonized as contributing to heart disease and weight gain,due to the inherent fat and cholesterol content. We are told that eating eggs contributed to the top cause of death in America; heart disease.

Gradually, however, mainstream nutritional advice came around on the idea that eggs did not contribute to heart disease, and that they actually might do the opposite. Eggs were rich in protein, healthy fats, and nutrients like B vitamins, selenium and vitamin A that worked to prevent disease far more than promote it.

Of course, this was nothing new to the Kaufmann Diet, which for years had promoted eggs as a healthy source of nutrition. Eggs, in fact, were one of the best foods you could eat on an antifungal diet––a diet that eliminated sugar, grains, and foods that are often contained with yeast and/or fungus.

Often, people on such a diet experience relief from a wide variety of health symptoms, many of which have plagued them for many years.

The maligning of eggs, however, was not over. Many people now claim that eggs contribute to another killer disease––cancer.

Specifically, eatings eggs––according to one study––increased the chances of lethal prostate cancer in men. The study, which involved over 27,000 men (of which less than 200 died during the study), claims that men who eat 2.5 eggs per week or more had an 81% increase in prostate cancer spreading or becoming lethal compared to men who ate less than .5 eggs per week.

What Does This Mean For Eggs?

It is important to note a few things about the study.

First, the study was not looking for whether eggs caused prostate cancer to begin with. In other words, eggs could very well be a part of a healthy lifestyle that could prevent prostate cancer––researchers were simply looking at what potentially exacerbated prostate cancer.

However, because of the relatively few lethal cases of prostate cancer in the study (less than 1%), Dr. Steven Kaplan, MD––a prominent prostate researcher at New York Presbyterian Hospital and Weill Cornell Medical Center states that the results could simply be a coincidence.

Furthermore, the component of eggs that researchers decided was responsible for the exacerbation of prostate cancer was choline––an important nutrient similar to a B vitamin found in high concentrations in eggs. Choline helps supports brain development and function, energy levels, metabolism, muscle, and nerve function.

Should You Eat Eggs?

In short, yes, you probably should. Eggs are still a healthy, whole-food source of protein, healthy fat, and beneficial nutrients, even choline. Even prominent researchers in the study implicating eggs in the worsening of cancer (not as an actual cause of cancer) say that more research is needed. Likely, if the past is any indication of the future, what they will find is that eggs can be an important part of a healthy diet that can work towards preventing disease.

Furthermore, eggs can be an important part of an anti-fungal diet program. Given some of the research linking fungus and yeast to cancer, eggs might even have some anti-cancer benefit in this regard.