Are You Eating These Invisible Poisons? 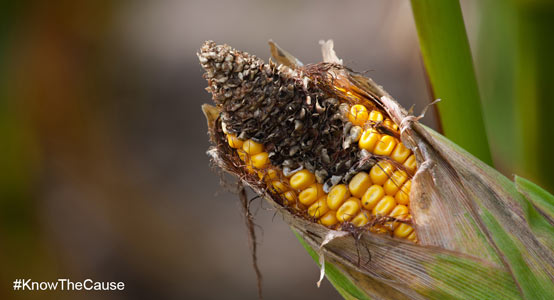 Any prudent consumer tries his or her best to stretch every dollar they spend to its maximum potential. This means that letting food go to waste is unacceptable. This is in part why we have so many preservatives in food today – to prevent against bacterial and fungal colonization that renders food inedible, and the resulting loss of money spent on food we aren’t able to eat before it is rendered inedible.

The fact is, germs are everywhere, and they need to eat the same way we do. If you let food sit long enough, some microbe – particularly fungi – is going to colonize.

We’ve all seen this, likely in our own kitchens:

Seeing this, we’re experiencing the “ubiquity” of fungi; that is, fungi are everywhere.

Given enough time, fungal spores in the air will land and colonize on food. Some foods are more likely to be colonized than others. But given enough time, any food will succumb to the great fungal decomposers. (OK, maybe not a certain sponge cake with the creamy center we’re all thinking of…but that is a subject for another time.)

Fungal contamination of food isn’t a new idea to veteran viewers of Know the Cause, or to readers of KnowTheCause.com. But if you’re new, you should know something about food and fungal overgrowth in your body.

Poisons In Our Food – Even When We’re Gluten-Free?

Fungal contamination of food is an important enough issue that serious scientific research has explored the subject. Some of the research has shown that our corn and grain supplies are “universally” and “commonly” (respectively) contaminated with poisons certain types of fungi produce. Some of these poisons have been linked to health problems, ranging from allergies to cancer and diabetes.

So think about your own diet. How many servings of grain do you eat every day? Think about the cereal for breakfast, the sandwiches, and the bread sticks. We know you’re aware of gluten, but did you know those grain-based foods could also be contaminated by fungal poisons?

And as for those of you going “gluten-free”, did you know that corn (which is gluten-free and found in many gluten free flours and bread alternatives) has been described as being “universally” contaminated by fungal poisons?

Walk down this trail for a moment. Two foods that Americans consume in great volume are often contaminated with poison. Compound that with a lifetime of consuming copious amounts of grains and corn, and the fact that disease is rampant starts to make a little bit more sense.

Americans routinely consume corn and grains and a variety of products made from these two crops. As a result, they are routinely exposing themselves to dangerous poisons, which could possibly be making them sick. This is one of the two primary reasons why grains, corn, and a select few other crops are disallowed on the Kaufmann Diet. Exposure to these poisons is not something your doctor or our regulators would likely caution you against. But the research is there.

Back to the topic at hand: When you see mold on food, is it safe to eat? Usually the disgust factor takes over, and most people toss whatever has been contaminated with mold. But in the name of prudence and thriftiness, is moldy food OK?

SO…What Should I Do?

There are a few things to remember.

Often, the food most likely to be contaminated with mold probably isn’t on the Kaufmann Diet, anyway.

Bread is strictly forbidden, as is most cheese. In the case of bread: Bread is made of grains that are often contaminated with mycotoxins, which is strike 1. And both of these foods are disallowed because of the sugar content, (carbs in grains that convert directly to sugar during digestion, and lactose in milk are the sugars inherent in these foods), which would feed any underlying fungal infection, which may be manifesting as symptoms you never thought were fungus-related. (See the Fungal Quotient Questionnaire in the back of Doug’s books for more details.)

Many fruits, which are susceptible to fungal colonization, are going to be high in sugar, and are also limited on the Kaufmann Diet. For these reasons, these commonly moldy foods aren’t things you’d be eating on Kaufmann 1 of the Kaufmann Diet, or (with the exception of more fruit) Kaufmann 2, anyway.

Furthermore, some fungi produce poisons under the right conditions. While most of the molds found on food aren’t considered the most dangerous varieties, these molds may still produce mycotoxins, (poisons), and all them will produce spores. In other words, there is the potential for contamination beyond just the part of the food that mold is visible on. Cutting the moldy portion off won’t necessarily render the rest of the food safe to eat or mold-free.

From a Kaufmann Diet perspective, any food with visible mold should be considered off limits. The diet seeks to avoid fungi and any foods that might be contaminated with them. Keep an eye on your produce and shun foods that are commonly contaminated, to begin with. Try keeping produce dry and out of the dark as much as possible. Freezing produce that you don’t immediately eat may be a good idea, too.

The bottom line is that the goal is to stay as fungi-free as possible!