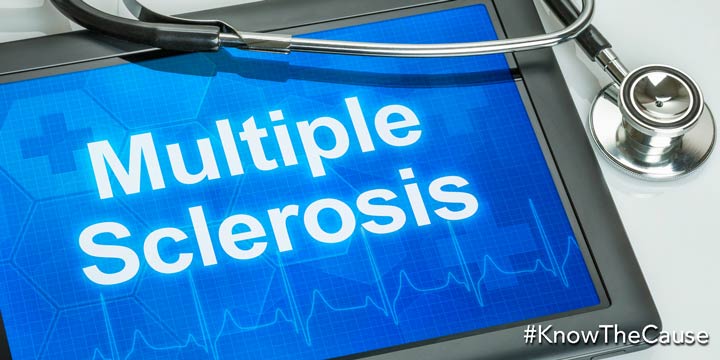 Dr. Dave Holland is the co-author, with Doug Kaufmann, of the new book, “The Fungus Link, Volume 2.” Inside this follow-up to their book “The Fungus Link,” you’ll not only learn about the dangers of antibiotics. You’ll also learn about the ins and outs of natural and prescriptive antifungals. Additionally, Doug and Dave share with you the role fungi and their mycotoxins play in what are unfortunately everyday diseases such as prostatitis, Ear-nose-throat disorders, weight problems (including obesity and anorexia), autoimmune diseases, hormonal disorders, neurologic diseases, hair loss, and eye problems.

The National Multiple Sclerosis Society, one of several non-profit organizations dealing with Multiple Sclerosis (MS) research funding and patient assistance, raised almost $74 million dollars in the fiscal year 2001. It spent $64 million, of which $54.8 million went toward program expenses, and $6.6 million was directed at fundraising efforts. Two million goes toward administrative costs. The CEO alone makes over $300,000. (1)

Still, in the 57 years of the society’s existence, no cause for MS has been assigned. I use the word “assigned” and not “found,” because I believe a cause has already been found. In our book, “The Fungus Link, Volume 2,” Doug Kaufmann and I discuss the role of fungal toxins, called mycotoxins, in the etiology of MS. The evidence brought forth by various scientists over the years and compiled in a small section of this book is quite compelling. It is so compelling that, at this point, I believe scientists will be forced into a position of proving that mycotoxins are NOT the cause of MS, a task at which, I believe, they shall not succeed.

MS is characterized by destruction of the protective sheath- called the myelin sheath- around nerves in the brain and the spinal cord. As a result, the transmission of nerve impulses to other nerves, muscles, and vital organs is interrupted. This impaired nerve function translates into symptoms such as difficulty in walking, abnormal, “pins and needles” sensations throughout the body; pain and loss of vision due to inflammation of the optic nerve, tremors, incoordination, paralysis, and impaired thinking and memory (2). In addition, muscle wasting, bladder dysfunction, fatigue, osteoporosis, and a host of other problems may develop either directly or indirectly due to this nerve damage.

Although there is a genetic predisposition toward MS, as proven in studies of twins, only a third of those that are genetically susceptible will get MS, indicating there is still an outside factor involved (3). MS is more common in those born and raised above the 37th parallel (a line extending from Newport News, VA to Santa Cruz, CA); however, if a person moves to an area of low risk (i.e. below the 40th parallel) prior to adolescence, they assume the lower risk of their new location. These last points support the idea of an environmental exposure link to the disease.

If outside causes are to blame, then Oppenheim, an early 1900’s researcher, was the closest in his assertion that MS is caused by an environmental toxin. Other researchers of his day thought that there was a defect in the blood vessels or in the glial tissues. Pierre Marie, in the late 1800’s, felt that MS was caused by an infectious agent. However, despite all of the “infection” theories that have been tested over the past 150 plus years, not one- whether bacteria, virus, Chlamydia or scrapie-like agent- has proven to be the culprit.

So, let’s apply what we already know about MS and see if we truly know the cause of MS or not. Mycotoxins are chemicals made by fungi. They are found in grains that have been contaminated with fungi and mold. Some mycotoxins are used for medicinal purposes. Antibiotics, such as penicillin and the cephalosporin drugs, are fungal metabolites- they are mycotoxins. Alcohol is a mycotoxin. Aflatoxin, the most carcinogenic substance on earth, is a mycotoxin. The most commonly contaminated crops are peanuts, corn, and wheat.

Often, other foods such as barley, apples, sorghum, and rye can be contaminated as well. Some mycotoxins are produced in our body by the yeast in our intestines or vaginal tract. In one study, 3 women severely symptomatic for vaginal candidiasis were found to have vaginal fluid samples with significant levels of a mycotoxin called gliotoxin (4). From our environment, we can be exposed to mycotoxins through countless routes: ingestion, inhalation, skin contact, etc. The question is, once inside the body, can these mycotoxins damage nerves? Let’s answer that question now.

We already know that, in MS, there is a loss of molecules called sphingolipids from the white matter in the central nervous system (5). What is not well known is the fact that mycotoxins can actually disrupt sphingolipid biosynthesis (6). Specifically, gliotoxin, as we mentioned above, on a slightly larger scale can induce nerve cell death (apoptosis).

Gliotoxin is a heat stable chemical made by Aspergillus, Candida, and other species of fungi. (7). Not coincidentally, scientists have recovered a heat stable toxin from the cerebrospinal fluid (CSF) of MS patients. In this particular study, they took the CSF from MS patients, heat-treated it to destroy any infectious germs, and then exposed it to nerve cells in a laboratory culture. What happened? The nerve cells died! They called this heat-stable toxin “gliotoxin.”

The source of gliotoxin appears to be, again, primarily from the yeast and fungi within the human body. As such, gliotoxin is less important as an agricultural scourge than are other mycotoxins such as fumonisins, made by Fusarium and Aspergillus fungi, and thepenetrimD toxin made by Penicilliumcrustosum. Fumonisins are a group of mycotoxins that happen to be neurotoxic as well as carcinogenic. They are “universally present in corn and corn-based products.” (8). Penitrem mycotoxins are found in things such as moldy apple products.PenetremD can cause tremors, convulsions, limb weakness, andataxis(unsteady gait), “not unlike the symptoms observed in MS.” (9).

As there are different classes of MS (chronic progressive, relapsing-remitting, etc.) it may very well be that the different classes are being caused by different classes of mycotoxins. In addition, the regional differences in the prevalence of MS might be explained by the particular agricultural products that dominate the most affected areas. For example, the part of America that lies above the 37th parallel also

happens to encompass thecornbelt. Remember that corn is universally contaminated with mycotoxins (7). This area is also represented by much of the wheat belt. Is this just a coincidence, or good evidence of an environmental exposure risk factor?

Let’s talk about some of the latest treatments for MS. Dr. Mercola has already stated in a previous article that most MS drugs are a waste of money (10). The new buzz on the town, however, is that statin drugs (cholesterol-lowering drugs) have proven effective in slowing the progression of MS (11-13). Their effectiveness should not surprise us, in light of the fungal/mycotoxin theory, when we also learn that statin drugs are antifungal (14).

Dr. Mercola has also mentioned in previous articles that Vitamin Das well as plain old sunlight can reduce mortality from and positively influence the immune system in MS (15,16). Other researchers have explained that the reason why these work is, once again, Vitamin D, whether taken in the form of a cod liver oil supplement or made naturally by our body from sunlight exposure, is anti-mycotoxin (14).

Finally, let’s talk about diet again. Last year a German researcher claimed that eating smoked sausage in childhood was responsible for causing multiple sclerosis later in life. (16). Dr. A.V. Costantini, retired head of the World Health Organization’s collaborating center for mycotoxins in food, helps us out here by explaining that smoked and aged meats are often contaminated with mycotoxins (18). Thus the cause of MS, according to these and other researchers, is right in our food.

In another of Dr. Mercola’s articles, he talked about how starving mice with an MS-like condition resulted in fewer symptoms and decreased progression of the illness (19). Why does starvation work? In our humble opinion, it could be as simple as: the fewer foods taken in, the fewer mycotoxins that enter the body. You see, if we are following the standard, food pyramid, grain-based American diet, we are consuming on average from 0.15 to 0.5mg of aflatoxin per day (8). Aflatoxin is the only regulated mycotoxin in America, so what level of exposure we have to the other, known mycotoxins in our diet that we’ve discussed is a guess, at best. So starvation diets not only deprive us of calories. They also “deprive” us of disease-causing, carcinogenic mycotoxins.

If indeed mycotoxins cause MS, then there are a number of steps one must take to minimize exposure to fungi and their mycotoxins. We just finished talking about diet. Since mycotoxins are commonly found in grain foods (7,8), then it would be wise to minimize grains in our diet. Doug Kaufmann outlines his Initial Phase diet in our book, The Fungus Link, Volume 2. As well, Dr. Mercola has published his book, The No-Grain Diet, which offers equally valuable information. Secondly, we should minimize our exposure to antibiotics.

Antibiotics are, for the most part, derived from fungi and are therefore classified as mycotoxins. If we’ve taken lots of antibiotics in the past, we should attempt to correct the damage done by these by taking a good probiotic supplement. Lastly, if we have any obvious signs of fungal infection in our body, and to us, simply having MS might qualify as an obvious sign, it might behoove us to take natural or prescriptive antifungals for a period of time. Remember that gliotoxin can be made by fungi and yeast that are already in the body, not necessarily by fungi that reside in contaminated foods.

Doug and I hope that we’ve given you some insight to this “mysterious” disease of MS. It seems, according to the research we’ve pointed to, that the cause for this disease is right before our eyes. Now, we just need to apply this knowledge. Future research should be directed at treating the disease as if it were caused by fungi and their devastating mycotoxins. 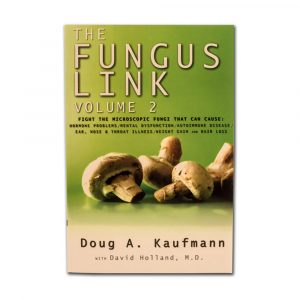 This is the second installment of Doug Kaufmann’s Best Selling Series The Fungus Link. By popular demand, The Fungus Link Volume 2 picks up where Volume 1 left off, shedding even more light on why fungus and its poisons may be intimately linked to your symptoms.

GET IT IN OUR BOOKSTORE

PrevPreviousCAT SCAM
NextWhat Are The Most Common Nutrient Deficiencies? Pt. 1 of 3Next