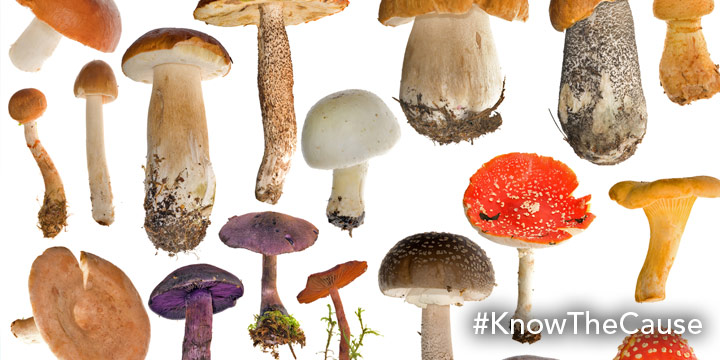 One of the more popular kinds of questions we receive pertains to medicinal mushrooms. In case you don’t know, there are lots of mushrooms that are considered to have medicinal qualities. A few of them include reishi, shitaki, artist’s conk, lion’s mane, chaga, and turkey tail.

I’ve always been transparent in my articles and on Know the Cause, and this is a subject in which I have to confess being double-minded at times. I have studied medicinal mushrooms from some of the leading experts in that area, and I have, of course, studied harmful mushrooms and fungus from the most important thought leader in the field, Doug Kaufmann. I very well understand the pro- and anti-medicinal mushroom arguments.

Let me tell you why I’m cautious with medicinal mushrooms. When I’ve visited with medicinal mushroom experts, only one of them had even heard of the term “mycotoxin”. Only one! Mycotoxins are poisons – or “secondary metabolites” – that mushrooms and fungus create. Mycotoxins can cause absolute health havoc in the body. If you call yourself an expert in the use of mushrooms for health, but have never even heard of mycotoxins, I question whether you know the whole story. It reminds me of all the general experts in the world of natural health who have no idea that fungus and their mycotoxins are a crucial part of the overall cause of disease in America. Without that knowledge, they’re missing an enormous part of the picture, in my opinion.

Without this knowledge of mycotoxins, a medicinal mushroom advocate’s knowledge and research is woefully incomplete. If there is a poison in the mushrooms they’re regularly consuming, but they’re never thought to research it beforehand, their risk of exposure can conceivably skyrocket. And just because they don’t feel the effects immediately like they would from an overtly poisonous mushroom doesn’t’ mean it’s necessarily safe. Think about smokers. You don’t’ get cancer from one cigarette. It’s a gradual thing. We know the same is true of many mycotoxins. Wouldn’t it be better if the pro-mushroom community knew a little more about mycotoxins before whole-heartedly approving their use? (Remember, even though Doug has warned about certain foods for over four decades, the larger scientific community only began agreeing on the deleterious effects of the mycotoxins in stored cereal grains in 2002 when a major report was published in the Journal of the American Medical Association. Sometimes, it takes a maverick like Doug, who has studied the effects of pathogenic fungi for most of his career to sound the warning bell for the larger scientific community.)

Remember, mushrooms create mycotoxins. Medicinal mushrooms are….mushrooms! They’re fungi. It could be that medicinal mushrooms are largely free of mycotoxins that are harmful to humans. But what if they’re not, and what if the experts in medicinal mycology simply aren’t aware that they should be looking for these potential toxins? It does seem worth slowing down a bit when toying around with things that are in a family known to make human poisons.

To be fair, I’m fully aware of all the published reports about certain mushrooms’ health-promoting qualities. This is why I’ve given them a serious look. But do you know what’s interesting about many of these properties? Many of the health-promoting benefits are derived from nutrients that are readily available elsewhere. For example, one of the health-promoting substances in reishi is beta glucans. We talk about glucans almost every week on Know the Cause. We love their immune-modulating properties. But is it required that we eat whole mushrooms in order to get them, especially since great beta glucans supplements are available?

The bottom line is that medicinal mushrooms, though very interesting, are not currently approved on Doug’s Kaufmann 1 protocol. They may be some day. But that day will come only after “experts” in the medicinal mycology field learn the word “mycotoxin” and begin developing comprehensive studies and lists to show which medicinal mushrooms make mycotoxins, and which do not. Until such lists exist, we can’t be certain that the mushrooms you’re taking to promote healing aren’t actually preventing it.