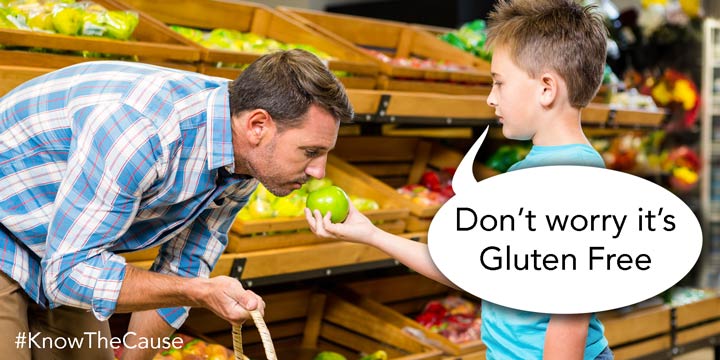 GREAT NEWS! Apples are gluten-free! Just when you think misinformation can’t get worse, it often does! While I’m 100% in favor of ridding your body of symptoms and diseases by avoiding grains in your diet, I’m opposed hyping apple sales with fear tactics. Apples never had gluten in them! I have to chuckle every time I’m in a grocery store! Celery sticks are gluten free-you’re kidding…right?

Unfortunately, doctors are diagnosing more and more celiac disease based on their patients avoiding a few grains and feeling better!

Gluten is the “glue” in wheat and a few other grains that give them their sticky texture. It is believed that gluten causes gut diseases like celiac disease. Are we certain of this? What we are certain of is that when people stop eating wheat, many of them feel much better, but diagnosing that as having celiac disease is, in my opinion, premature.

If I had any one of the hundreds of diagnosable gut disease, I’d avoid all grains whether or not they had gluten in them. Grains convert to sugar in everyone’s gut and this sugar feeds yeast and fungi, a more likely cause of your misery. Know that our most common poison (mycotoxins are poisons made by certain fungi that impregnate grains) carrying grain is corn…. and like apple, it is absolutely gluten-free! But the Aspergillus mold that grows on corn can and does cause human cancer! Why aren’t we more concerned about that?

Blood tests for gluten sensitivity only prove to me that gut leakage exists in celiac patients. This leakage enables gluten to enter our bloodstream, where protective antibodies to gluten are made by our B cell lymphocytes (white blood cells). Yeast and even some very common drugs like non-steroidal anti-inflammatory drugs (NSAIDS) can poke holes through our intestine, so isolating what has leaked through is merely observing the effect, and believing it is the cause! Seal up the gut by addressing the hole-poker, so gluten won’t leak through!

I want you to be well. I don’t want you to be misdiagnosed. In my humble opinion, celiac patients should not be eating foods that are contaminated with fungus until fungus has been completely ruled out as the cause of their health problems.

Yes, peanuts, corn, sugar, and beer are all gluten-free, but if the true diagnosis is linked to fungus, in the long run, these will hurt more than help you!

PrevPreviousDoes summertime make fungal symptoms worse?
Next3 Nuts You Should Add To Your DietNext