What You Never Knew About Rosemary 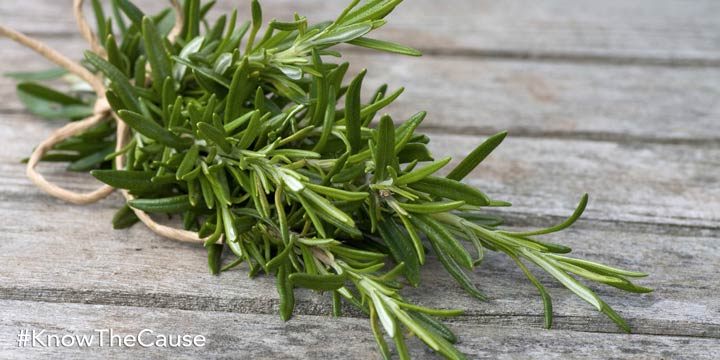 Rosemary is an herb that is native to the Mediterranean region, but it is not uncommon to see rosemary plants in gardens everywhere throughout all seasons. It is a hearty perennial plant in the mint family with a slightly piney flavor and aroma.

Rosemary derives its name from a story about the Virgin Mary, who it is said put the white flowers of a bush on her blue cloak, at which time the flowers turned blue; from henceforth, the bush was called the “rose of Mary”, or rosemary. The flowers of the rosemary plant can be many different colors in addition to blue.

Rosemary lends itself to many types of cuisine, but many do not realize that its delicious flavor and pleasing aroma are coupled with some of its lesser-known health benefits. Rosemary has applications for cooking, internal use, topical use and as an aromatherapy agent. It is important to remember that one should not consume rosemary essential oils, but consuming the leaves is fine. However, it is preferable to not cook them, which can diminish the beneficial compounds’ efficacy.

Rosemary contains properties that are beneficial for brain health; it has powerful benefits for memory, cognition and mood. In one study, rosemary essential oil showed benefits for mood and quality of memory over lavender oil.

Other studies show that rosemary has benefits for memory up to a certain dose, but those benefits disappeared as the dose was increased. Most people do not consume rosemary in large quantities at once, and this leads us to believe that a little over a long time may be beneficial for memory, making rosemary easier to incorporate into your diet and/or supplement regimen.

The aroma of rosemary oil is also thought to assist in relieving anxiety and depression, and it is often used in diffusers for aromatherapy purposes.

To that end, rosemary contains a number of compounds that lend it to having anti-cancer properties; in conjunction with other cancer treatments, the active ingredients in rosemary assisted in preventing the spread of ovarian cancer. Its anti-inflammatory properties may also have positive benefit for blood pressure, arthritis and physical injury.

Rosemary has analgesic, or numbing properties, meaning it can be beneficial for the treatment of pain, particularly when applied topically. Furthermore, rosemary has antimicrobial, and particularly, anti-fungal properties. This makes rosemary a useful tool for those struggling with fungal or yeast problems on the skin.