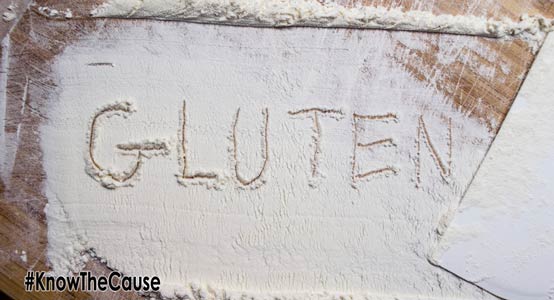 What is Gluten and should I care?

Gluten is simply the name for the proteins found in a variety of cereal grains. Specifically, wheat is known as the source of gluten in most people’s diets, but gluten is also found in barley, rye and any varieties or derivatives from wheat. These proteins are what give dough made from wheat its elastic characteristic.

Why should you be worried about gluten? Over the past few decades, scientists have discovered that many people are allergic to wheat, or specifically the protein, gluten, in wheat. When this intolerance to gluten becomes strong enough, one can be diagnosed with celiac disease. Gluten intolerance and celiac disease can both cause a variety of symptoms––over 300 known symptoms––but may not cause any symptoms at all! Long term health complications, particularly destruction of the intestines, are associated with inflammation caused by celiac disease.

Many nutritionists have claimed that gluten can cause inflammation in people regardless of whether one is technically “allergic” to it or not. This, in part, is what has driven the “gluten-free” trend that has been popularized in the last few years.

How does this relate to those of us on the Kaufmann 1 or Two Diet? Most adherents to the diet are already giving up the three primary sources of gluten––wheat, rye and barley. This is not because of the gluten content, necessarily, but for two other reasons: Grains are high in carbohydrates, which convert to sugar during digestion, and according to research, grains are at risk for being contaminated with fungal poisons, known as mycotoxins. These poisons are known to cause serious health problems in both humans and animals.

The goal of the Kaufmann 1 and Two Diets is to protect against fungi, yeasts and mycotoxins. Subsequently, grains are eliminated from the diet, along with the inherent gluten. Knowing this, it raises an interesting question––if eliminating mycotoxin–contaminated grains from the diet relieves the symptoms of celiac disease, is celiac disease a gluten intolerance problem, or a mycotoxin-intolerance problem? While this is speculation, it is certainly interesting to note that eliminating a fungus-contaminated food aids in clearing up health problems.

So while the Kaufmann 1 and Kaufmann 2 diets have fundamentally different goals than gluten-free diets, they share the commonality of eliminating gluten, itself.

It is important to note that, simply because a food is gluten free, that does not necessarily mean that food is still fit for the Kaufmann 1 or Two Diet. Remember to remain cognizant of labels and ingredients in foods.

For more information on foods allowed on the diets, check out our bookstore.