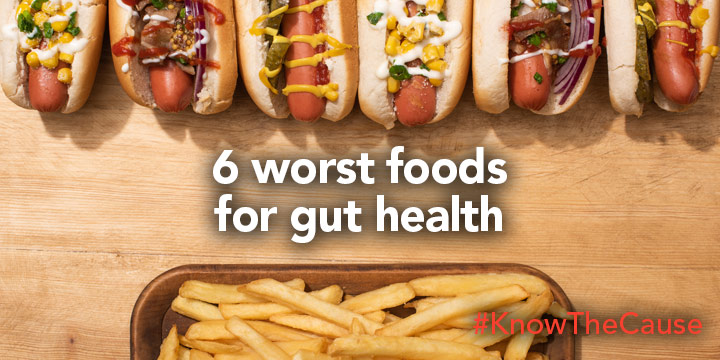 We know that gut health is an important aspect of overall health, and that, particularly if you are going to have success on The Kaufmann Diet, you want to support the beneficial flora in your gut as best you can.

While there are other lifestyle factors such as stress, smoking, activity level, and antibiotic usage that can affect the microbiome of the gut, food is obviously a key factor when it comes to gut health. And, with all the evidence science has found in recent years concerning the importance of gut health, there is a lot of advice about which foods are beneficial and which foods are harmful for the health of the gut. Often, though, this advice is missing some critical information.

Recall that antibiotic usage is among the most detrimental factors for the health of our beneficial bacteria. This is because antibiotics kill bacteria indiscriminately, good and bad.

But, do you know where antibiotics come from?

Molds naturally emit poisons known as mycotoxins. The problem is, many molds––and subsequently, mycotoxins–– find their way into our foods. And, there is published research documenting their presence in many of the foods we eat every day. It is easy to speculate that if you are regularly getting these mycotoxins in your diet, in much the same way antibiotics can damage your gut health, these mycotoxins can too.

This is one of the cornerstones of The Kaufmann Diet, an anti-fungal program designed to starve pathogenic yeast and fungi in the body and eliminate common exposures to mycotoxins in the diet. When you eliminate many of the foods that fit this profile, you not only support the healthy of the gut, but the entire body. So, when it comes to detrimental foods for gut health, the below list is from the perspective of an anti-fungal diet. An anti-fungal diet might be one of the best ways to promote the health of the gut, and if so, these are some foods you should seek to avoid.

Corn has been shown to be universally contaminated with mycotoxins by some researchers. Corn and its derivatives (i.e., corn syrup), of course, are virtually inescapable if you regularly eat processed or fast foods. Corn should definitely be avoided, in all forms, while you are on The Kaufmann Diet.

Similar to corn, grains like wheat have been shown to be regularly contaminated with mycotoxins, according to researchers. Largely, this is likely due to these foods being stored in silos. Wheat, too, is in many processed foods; wheat and other grains should be avoided while you are on The Kaufmann Diet, so be sure to read the labels of any packaged foods you buy.

Alcohol, itself, is made by fermenting sugar with yeast. It can, itself, be considered a mycotoxin––too much can kill you and and it is a byproduct of yeast. Alcoholic beverages are also regularly made using foods that are also known to be contaminated with mycotoxins, so alcohol really represents a double edged sword when it comes to affecting gut health. It is no surprise, then, that alcohol is known to wreak havoc on the gut biome.

These two foods are thought to be commonly infested with molds and regularly contaminated with mycotoxins. These should be avoided on The Kaufmann Diet.

Conventionally raised animals are regularly given antibiotics and feed that is known to be contaminated with mold and mycotoxins. Opt for organic, grass-fed meats; pastured and organic poultry; and wild-caught fish, when possible.

The oils used to fry foods are thought to be detrimental to the gut biome. Also, fried foods are often breaded with grain and corn products, which should be avoided anyway on The Kaufmann Diet.

How To Repair Your Gut