Steak Vs Soy: Which Should You Choose? 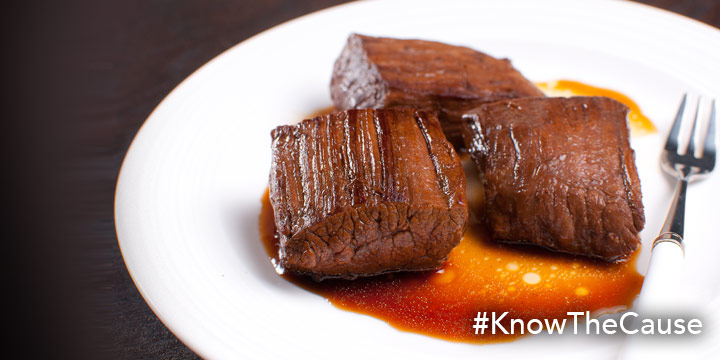 Should you skip a steak in lieu of tofu? The long-held, purportedly “conventional wisdom” discouraging red meat consumption still seems to be a centerpiece of health advice for most mainstream practitioners. This is in spite of reams of data:

1. Conflicting with  the long-held notion that animal fats are mostly responsible for clogging our arteries and causing disease

3. Providing evidence that beef––particularly grass-fed beef––is a nutrient and protein dense food––perhaps the most protein rich food on the planet.

Still, we are advised against steak, often in lieu of proteins like soy.

There are some things that are not wholly considered by this advice, but let’s take a look at the facts, specifically the nutrition facts.

In a nutshell, nothing is wrong with tofu, or soy––at first glance; tofu itself is nutritious, containing 17g of protein per serving, 9g of fat and 3g of carbs. That is a solid nutrient profile, even for those on The Kaufmann Diet. Two of the three grams of carbs in tofu come from fiber––a valuable nutrient to include in your diet. Tofu is also high in calcium, manganese, selenium, and iron.

A ribeye has a nutrient profile of 24g of protein per serving, and 10g of fat. Ribeye have no carbohydrates, but no fiber. Ribeyes are rich in zinc, selenium, niacin (B3), vitamin B6 and vitamin B12. Ribeye is an excellent source of iron.

When you dig a little deeper, however, some things become clear: Tofu is known to be contaminated with aflatoxins, which are a type of fungal metabolite known as a mycotoxin. Aflatoxins are some of the most carcinogenic substances on earth, known to cause liver cancer. This is not surprising, given that soy is often contaminated with fungi and the mycotoxins they produce.

There are other problems associated with soy consumption, namely that soy is estrogenic. While some claim the hormonal effects of soy are negligible, others claim it can cause problems like gynecomastia in men. Interestingly, one of the known effects of mycotoxins is hormone disruptions; perhaps the effects of soy have more to do with what hitches a ride along with it as opposed to the soy itself.

Yet, this is the type of protein we are told to enjoy in lieu of red meat.

So, which do you choose; a ribeye, or tofu? If you are on The Kaufmann Diet––and acquainted with the risks that mycotoxins pose––you will likely choose the ribeye, knowing it is far less likely to come with dangerous fungal poisons, and the fat content we have all been told to be concerned about is less of a worry than previously thought.