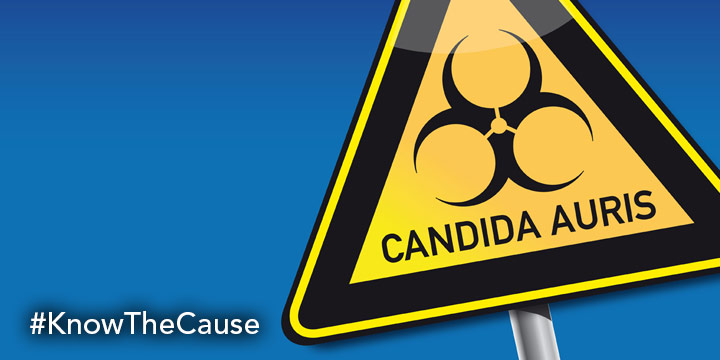 What genetic and biochemical features make Candida auris such a bad pathogen?   Candida auris differs markedly from other Candida species such as Candida albicans (the most common Candida species) and Candida glabrata (1). Most Candida infections are believed to result from infection from the intestinal or genitourinary tracts of the human host or other persons.  Candida auris is believed to have the rare ability to persistently colonize the human host’s skin, making it easily transmissible between patients (2, 3).

Candida albicans has the ability to undergo “phenotypic switching” in which a less pathogenic one cell yeast form can transform into a more pathogenic multicellular yeast-filament form (1). These filament Candida albicans forms can produce “biofilms” on body surfaces and are especially resistant to cellular defense mechanisms or antibiotics.  Candida auris also seems to be able to undergo phenotypic switching from a one-cell yeast form to a filament form which can form biofilms (1).

Candida auris strains have the ability to produce many enzymes which assist in destroying host cells, including lytic enzymes, lipases, and phospholipases.  The biofilm forming ability of Candida auris is less than that of Candida albicans but is greater than that of many other Candida species such as Candida glabrata (1). Candida auris has genes which code for effuxor pumps which remove drugs from the cells and produce resistance to commonly used antifungals such as azoles (1).

Candida auris can withstand temperatures as high as 42 oC (107.6 oF).  Candida auris can live/remain viable for at least 14 days on dry plastic surfaces (4)Thankfully, many common disinfectants seem to be effective against Candida auris.  A North Carolina study reported that many common disinfectants were effective (reducing viability by at least 1,000 fold) in reducing viability of Candida auris; including 70% ethanol or isopropyl alcohol, Lysol® (58% ethanol and 0.1% quaternary ammonium compounds), 35% periacetic acid, 2.4% glutaraldehyde, and a mixture of 27.5% hydrogen peroxide and 5.8% peroxyacetic acid (5).