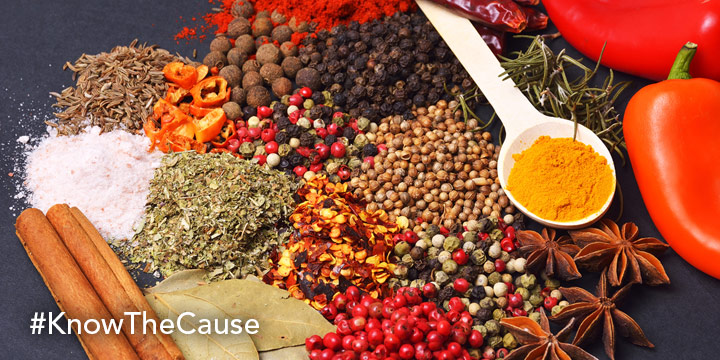 Spices are packed with health benefits beyond their delicious flavor and could be considered healing spices.

Spices have been used medicinally for millennia, and the more scientists study the properties of these wonderful plants, the more it is confirmed that indeed they do have healing properties and numerous health benefits.

On The Kaufmann Diet, you want to incorporate these spices as much into your cooking as much as you can, but not just for the health benefits. For many people, coming off of a way of eating they’ve had (sometimes) for decades can be difficult, but spices impart delicious flavor to foods when used correctly, and this can make it seem like you are missing out on far less than you would otherwise think.

Of course, there are many supplements that use these spices too, from the whole spice to the extracted oils. These too can have tremendous benefit as most of these supplements have anti-fungal activity ranging from marginal to nearly prescription grade (in the case of cinnamon and clove).

(We have covered turmeric/curcumin and oregano so many times that they are off this list; instead, here are some spices that get discussed less often!)

Though it is common, black pepper posses numerous health benefits that might make you want to put it on everything. It protects against diseases like heart disease and cancer, might help regulate blood pressure and is good for digestion.

Cayenne pepper is derived from hot red peppers. It possesses anti-inflammatory properties, and it may be beneficial for preventing cancer and heart disease. It is also good for flu and colds, boosting metabolism while curbing hunger and aiding in digestion.

Cinnamon has been shown to be potently anti-fungal––even as strong as some prescription medications. Cinnamon is also beneficial for those who need help controlling blood sugar levels and may be beneficial for curbing appetite. It possesses anti-inflammatory properties, might be good for joint pain and is good for digestion.

Like cinnamon, clove is as potent an anti-fungal as some prescription medicines. It is good for pain relief as it possesses anesthetic qualities, but it also is good for an upset stomach and aids in digestions.

Coriander is derived from the seed of the cilantro plant, but its flavor profile is entirely different from that of cilantro. Coriander has many benefits for the gut; it is good for digestion, eases an upset stomach and may have some benefits against irritable bowel syndrome. It might also be beneficial for blood pressure regulation and might provide some protection against cancer.

Fennel is good for women who suffer from menstrual cramps and PMS symptoms. It is also beneficial against colic in babies and might provide benefits for the heart by lowering blood pressure.

Ginger is great for stomach problems, but it is also a potent antimicrobial and might be beneficial against certain kinds of pain, asthma and heartburn.

Rosemary possesses strong anti-cancer benefits; it is also thought to fight pain associated with arthritis and help protect the liver.

Saffron may posses some exciting brain benefits, providing relief from depression and protection against Alzheimer’s. It might be good for prevention of certain cancers, heart disease, Parkinson’s disease and anxiety disorders.

Star anise is known to have benefits against infections and may be beneficial even against viral infections.