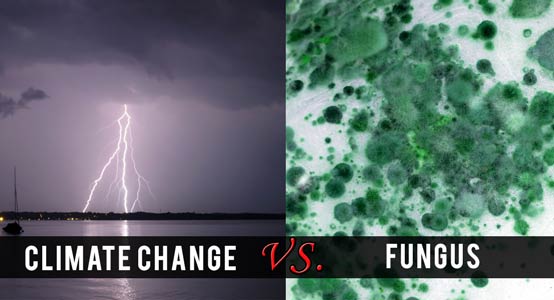 An English media source called “Geographical” highlights that we humans are undoubtedly digging our own graves with our forks and spoons. Their article, entitled The Fungal Threat to The Future of Our Food opens with words that I read daily in various fungal reports. Climate change and Fungus?

It says; “we live in a world of fungus. Some, like antibiotics, yeasts and mushrooms, we benefit from…” …really…? The article not only blames climate changes as responsible for fungal acceleration, but also then states that for the past 50 years cereals and other foods such as red wine, may be the victims of mycotoxin impregnation.

What a mixed message. While they are absolutely correct in stating that many foods in the human diet are riddled with certain fungi that produce dangerous mycotoxins, I happen believe that these fungi have been impregnating food for thousands of years in all kinds of weather.

Therefore, I believe that the jury is out on climate changes as the cause of fungal mycotoxins ending up in our food supply. None of us ever considered fungal rotted foods as being linked to climate changes 50 years ago, in 1966! Yet the food industry might just be blaming powers beyond their control to maintain the status quo.

Our consumption of antibiotics and alcohol are at record rates now and it is my belief that consumption of these fungal mycotoxins, not hot weather, is to blame for our many mysterious diseases. So, extolling the virtues of antibiotics, yeast and mushrooms as beneficial to our health is, in my opinion, endangering our health. Brilliantly, this article points out one fact that we have little control over and therefore (I believe) validates the use of antifungal medication use in every symptom and disease of unknown origin. It states, “Unlike most pests and viruses, we don’t know what new or even existing funguses are out there in the environment.” Truer words rarely appear in articles like this one.

Scientists agree that perhaps 1.5 million species of fungus exist, but they have only discovered about 75,000 of those. About 300 are known to cause human diseases. This leaves 1.425 million species out there that may well be linked to most diseases in the world. Indeed, I have published on many of them being linked to fungus. Think fungus and all should be well, despite global warming!