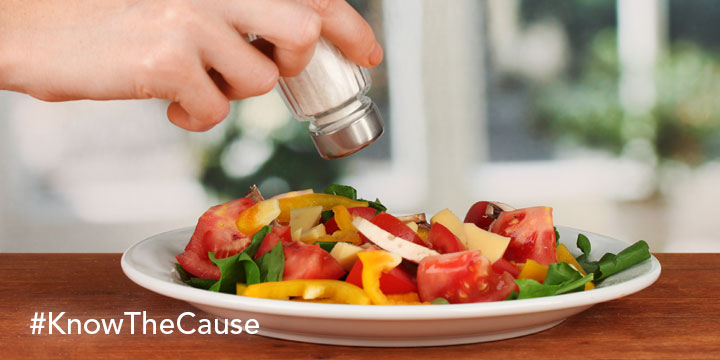 Sodium. You need it. But too much is never a good thing. Find out why you should watch your sodium intake.

It is not uncommon to hear about how addictive sugar is and how many people have such a hard time giving it up, especially since it is found in so many foods that comprise our industrialized, processed food system. Sugar has been shown to be as addictive as cocaine in some studies, and while giving it up can be difficult for many people, many people are addicted to another (non-illicit) white, powdery food additive: Salt (sodium).

Table salt (AKA, sodium chloride or NaCL) is one of the most common additives to food. It enhances the flavors of the foods around it, and most people take its use for granted. Coming in many forms––from iodized salt, to sea salt, to pink Himalayan salt––salt is called for in most recipes and heavily used in most prepackaged foods and at restaurants. It has been used by humans both as a food additive and preservative since time immemorial. Salt was so important in antiquity that Roman soldiers were often paid in salt, which is where our modern term, “salary”, is derived from.

For healthy people, it is recommended to consume around 2,300 mg of sodium per day on the high end. However, if you start reading the labels of many foods, you start to realize the disparity between what the recommended daily amount (RDA) of sodium for a healthy diet is and how much salt most people actually consume. It is not uncommon for a meal at a fast food restaurant to eclipse 2,300 mg of sodium in a single meal! It thought that on average, Americans consume closer to 3,400 mg per day of sodium.

Why Is Salt So Addictive?

While most people think of sodium as something to be avoided, the truth is that sodium––like other electrolytes––is an important nutrient. This is part of the reason why people crave salty flavors. In this sense, salt is similar to sugary foods and fatty foods; our tastebuds are simply designed to enjoy these flavors, because ultimately, we need these things for energy (in the case of sugar and fat) and to maintain chemical processes in our body (in the case of salt).

The problem has become that we do not live on the plains hunting and foraging for food anymore; scarcity––something our bodies are designed to deal with––is no longer an issue. What’s left is a craving for foods that we have in abundance, and too much of a good thing can turn into a disaster very quickly.

We certainly have seen the destruction caused by too much sugar in the diet. Salt, unfortunately, is no exception.

Why You Should Watch Your Sodium

Most people know that a diet high in sodium is associated with high blood pressure, which also known as “the silent killer”. Too much salt causes the body to retain water, raising blood pressure, which in turn makes the heart pump harder and puts stress on the kidneys. Long term, these can lead to serious health problems and increase the chance of heart attack and stroke. Too much salt, however, is also associated with asthma, gastric cancers, kidney stones and osteoporosis.

While limiting sodium is important, cutting sodium out of your diet altogether, however, is not the answer. Again, your body does need this vital nutrient. Without enough of it, many of the biochemical processes in your body would not be possible. Most governing bodies recommend between 1,500 and 2,300 mg daily. If you are active and sweat frequently, your needs might even be higher. This is something to discuss with your doctor. It is important to always follow his or her advice when making dietary changes, especially with sodium.

One of the things that is encourage with the Kaufmann Diet is to cook at home and eliminate most prepackaged foods in favor of fresh, whole foods. In this context, monitoring your salt intake become much easier. Furthermore––similar to how many people are with sugar––after a few weeks on the diet, you will likely realize just how salty foods were when you were eating the standard American diet. While on The Kaufmann Diet, your taste buds will definitely change more quickly than you would assume.

How To Cut Back on Sodium

Starting the Kaufmann Diet is a good place to start when it comes to limiting sodium. When you are on the Kaufmann Diet, you are already eliminating many of the foods in which added amounts of sodium are the highest, such as processed and prepackaged foods, frozen meals, sauces, prepackaged soups and marinades.

To further limit sodium, simply be judicious when adding sodium to your food. Be careful with foods like bacon, cured meats or deli meats on The Kaufmann diet; opt instead for fresh, lean meats when possible. In lieu of loads salt, add lots of herbs and spices to your food; this will impart delicious flavor and confer the benefits inherent in herbs and spices, including their anti-fungal activity.

Finally, some salt substitutes are available; often these are high in potassium, a nutrient most people do not get enough of in their diet. This can be beneficial, however it is very important to talk to your doctor before adding any salt substitutes to your diet, particularly if you have heart or kidney problems, or take any medications.