Numerous studies have reported that wet indoor conditions increase risk of asthma, headaches and chronic fatigue indoors. Other studies have reported that the allergens from mold and the endotoxins from gram-negative bacteria can significantly worsen asthma and wheezing.  High levels of indoor bacteria are also associated with significantly higher rates of respiratory and gastro intestinal infections.

Indoor molds and bacteria also produce a wide range of toxins which can worsen asthma, irritate the skin, and damage the immune and nervous systems.  Several well known mycotoxins Include:

2.    Trichothecene mycotoxins are produced by Stachybotrys, Memnoniella and Fusarium molds and are toxic to the immune and nervous systems.  Stachybotrys molds also produce a toxic protein called hemolysin which causes hemorrhage (excessive bleeding).

3.   Patulin is a common mycotoxin produced by Aspergilus and Penicillium and is often found in significant quantities in stale fruit juice and rotten apples.  Patulin and related compounds can cause immune problems and tremors.

4.  Gliotoxin is another common mycotoxin which is commonly produced by a wide range of fungi including Penicillium, Aspergillus, Trichoderma and Candida. Gliotoxin also damages the immune and nervous systems.

5.   Ochratoxin is produced by several Penicillium and Aspergillus species and can cause immunosupression, lung and kidney damage and kidney cancer.

6.  Fumonosins are produced by Fusarium and can damage the digestive system and alter the hormonal system.  Corn and other grains are often contaminated with fumonosins.

Several studies have reported finding significantly higher levels of these mycotoxins in the blood and body tissue of people exposed to heavy levels of indoor molds as compared to less exposed controls.

All indoor water problems like flooding, pipe leaks and soggy carpets should be fixed as soon as possible to limit growth of bacteria, molds and their toxins. Many bacteria and molds can grow rapidly and cover large areas in as little as 48 to 96 hours. Use of dehumidifiers and air conditioners in humid conditions can also reduce humidity and growth of molds and bacteria indoors.  Moldy food should be thrown out at once.

A good review of toxins produced by bacteria and molds in wet indoor environments is provided by Thrasher and Crawley in Toxicology and Industrial Health, September- October 2009. Much more study relating the effects of indoor molds and bacteria and their effects on human health is needed. 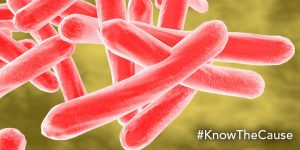