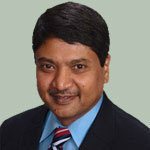 For several years he has helped many patients suffering from COPD (Chronic Obstructive Pulmonary Disease) and other lung problems by injecting them with their own immature stem cells after carefully harvesting them from their bone marrow and fat cells.

Be sure and leave us an iTunes Review

Mukesh Saraiya, MD, is board certified in both internal and pulmonary medicine.

For several years he has helped many patients suffering from COPD (Chronic Obstructive Pulmonary Disease) and other lung problems by injecting them with their own immature stem cells after carefully harvesting them from their bone marrow and fat cells.

The very fact that we all have these “reserve” stem cells that can not only travel to where they are needed after injection, but actually adapt and grow and renew tissues (thereby often stopping symptoms) where they are not working properly, absolutely amazes me. But that, and the fact that he is a brilliant and very kind man, is only my secondary reason for welcoming Dr Saraiya to this KTC podcast!

You know that I believe that many of our diseases are due to bugs-fungus specifically. Our immune systems are supposed to eradicate bugs in our blood stream and other tissues by having our white blood cells “phagocytizing” them (gobbling them up like the old arcade game Pacman). As I have reported, certain disease causing fungi outsmart phagocytosis by fooling it in favor of the fungus’s continuous growth throughout our body. That seems bizarre, but it happens nonetheless. What if the white blood cells ability to gobble up fungus was renewed?

Some medical reports indicate that stem cells tend to enhance our natural phagocytosis, so not only do they correct what might be wrong with the patient (arthritis, lung problems, etc…), but in doing so, they might begin enabling our white blood cells to gobble up the very disease causing fungus that might have caused the problem. Maybe, just maybe, that is how stem cell injections help so many!

Joining me on this podcast with Dr Saraiya is Kyle Drew. Kyle and I have been impressed with the ability of stem cells to fix what ails us for many years, so I invited him to join us in this fascinating discussion. Now, open your ear canals and your mind…