Which Foods Affect My Brain? 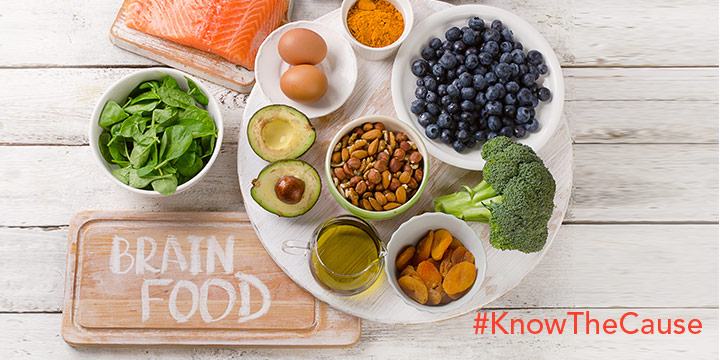 If we know that food can affect our brain––for better or worse––then it helps to know which foods do which.

When it comes to supporting brain health, it is important to remember that simply eating or excluding a few specific foods is less important than diet overall. And, it is important to remember that diet must fit into the context of a healthy lifestyle. Factors like exercise, stress reduction, and healthy sleep are all important components of brain health. If these lifestyle factors are not all a part of a unilateral approach, it is unlikely any one of them individually will have maximum benefit.

Which Foods To Include

These are all foods with purported benefits for brain health. All of these foods are included on The Kaufmann Diet.

Omega 3 fatty acids are among the best nutrients for supporting brain health. Fish like salmon, tuna, mackerel, and sardines are some of the best sources for omega 3 fats.

Similar to fish, nuts and seeds are good sources of healthy fats which promote brain health. Particularly, foods like walnuts, almonds, pumpkin seeds and chia seeds might be good for supporting brain health.

Blueberries are rich in antioxidants that are thought to be protective for the brain. Blueberries contain compounds that might also improve memory and cognition.

Eggs are rich in vitamins in minerals, some of which––specifically, vitamin b6, b12, choline, and folate––are associated with better brain health.

Turmeric has been studied for numerous health benefits; it is rich in anti-inflammatory compounds, some of which might have benefits for memory, fight depression, and promote the growth of brain cells.

Which Foods Should I Exclude?

These are foods that are known to detract from brain health:

These include desserts, sweets, and foods like potatoes, most breads, and pasta. The body doesn’t really distinguish between foods high in simple carbs or sugar; both flood the system with sugar, which is known to be detrimental to brain health and might increase the chances of depression according to some research.

Fried foods have been linked to problems with memory and depression, likely due to their inflammation-promoting properties.

Among the myriad of health problems associated with excessive alcohol consumption is the heightened risk of depression and dementia. More info on why alcohol might be bad for the brain is detailed below.

Foods like cured meats are often high in nitrates, which are known to negatively affect the gut flora, which is thought to have an effect on mood. While meat is great on The Kaufmann Diet, stick to fresh cuts when possible and avoid the cured and processed meats.

Did We Miss Something?

With so many people suffering brain symptoms, it is worth questioning: is there something else that might be instigating our brain problems?

Research has pointed to the fact that many foods that are common in people’s diets, such as grains, corn, sugar, peanuts and other foods are high in mold poisons called mycotoxins. Some of these have documented neurological effects and neurotoxicity.

The Kaufmann Diet eliminates many of these foods; many people who go on the diet experience relief from symptoms like brain fog and even depression and anxiety. It could be that it wasn’t the food, itself, but what was in the foods that was eliciting brain symptoms.

Do Foods Affect My Brain