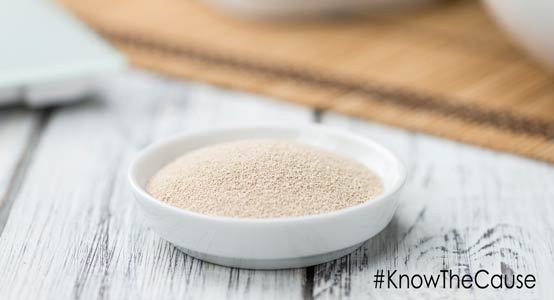 Yeast and products made with yeast are fairly common in our food system. Bread and alcoholic beverages are the first two that come to mind. Reading the ingredients of many processed foods reveals many types of yeast products, as well, such as torula yeast. Baker’s and Brewer’s yeast are two common kinds of yeast used in cooking. However, another type of yeast product has gained popularity recently; this is nutritional yeast.

Nutritional yeast is also known as “nooch” in the United States, and as savory yeast flakes in parts of Europe. It is available primarily at health food stores, but its rise in popularity has made its availability more widespread. Nutritional yeast comes from a strain of Saccharomyces cerevisiae, which is grown on sugar cane, molasses or beet molasses. It is heated to kill or “deactivate” the yeast, itself, so it is no longer alive when consumed. In this regard, it is fundamentally different from baker’s and brewer’s type yeasts, which are used in their live, active forms.

Nutritional yeast has a flavor and texture similar to Parmesan cheese, which is why it has gained so much popularity. Vegans and vegetarians often use nutritional yeast as a cheese substitute and use it to flavor all kinds of foods, salads and sauces.

The Kaufmann 1 and Two Diets exclude yeast and yeast products for a number of reasons. First, the goal of the diets is to starve any sort of pathogenic yeast infection within the body, and eliminate exposure to yeast, fungi and any potentially harmful byproducts they produce. Fungi and their byproducts––while not well-understood within the medical community––can cause serious, detrimental problems to human health.