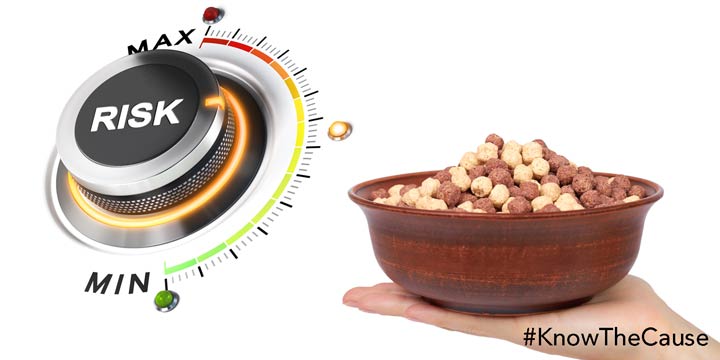 I honestly don’t know who coined the adage that breakfast was the most important meal, but if it is, you might rethink making cereal as the “go to” food for breakfast.

In 2011, author Jaime A. Heidel posted an article online, with the very catchy headline, Your Breakfast Cereal Is Killing You. Knowing that fungal mycotoxins grow on cereal grains, I had to agree with the headline. But the word “fungus” and “mycotoxins” were not even printed in the article. Rather, Heidel made the reader aware that MSG, and BHA and Fructose and several other questionable ingredients were often found in breakfast cereal.

I believe and have been teaching for decades that some of the natural ingredients, not so much those added ingredients, in breakfast cereals are the most dangerous.

A few weeks ago, allaboutfeed.net, an agricultural feed website posted that grains that makeup what animals eat is most often contaminated with a poison that Heidel completely overlooked! The headline, Large US Cop Yield: Mycotoxins Remain a Threat. educated readers on the dangers lurking in the American grain supply. Mind you, our FDA has set certain levels of what qualifies as edible grains when it comes to a few of these fungal poisons, but not all that were detected in this study. Fungal poisons in animal food can be more concentrated than in human food, but that is of little consequence to the many parents who set a box of cereal on the table, feeling assured that champions eat this food because strong bodies are being built by it!

Is It Time to Run From Cereals Yet?

Decades ago, when I discovered that our grain supply was contaminated with mycotoxins. Not only did I immediately stop consuming grains as best I could, but I began teaching you that avoiding grain might also benefit your health. Of course, dieticians and food specialists contend that grains, especially “whole grains” benefit our health in many ways. Unfortunately, there may be a reason, other than scientific, for their promotion of many food products. so be smart out there!

Politics aside, are grains OK to consume several times daily as is the recommendation of nutrition groups? I don’t believe so. Let me share an overview of this excellent article written by allaboutfeed.com

Keep in mind that this was American corn and wheat used in animal feedlots. Arguably, these same lots of grain can make their way to our American breakfast tables. This begs an important question:

Is American Grain Safe To Eat?

No, for healthy people, there isn’t a “cause and effect” relationship that exists between eating a bowl of cereal and immediate ill health, but Roberta Flacks song, “Killing Me Softly” rings in my ears every time I find myself walking by a cereal aisle in a store. Unless the dose is large, mycotoxins don’t induce sickness or death immediately but know that at least one mycotoxin found in our grain supply is well documented as a cause of liver cancer and others cause so many other miserable human symptoms and diseases. What was my breakfast this morning? As usual, a nice, whole, organic grapefruit is all I need.

In closing, the article referenced an American worker who identified the problems seen in farm animals, when exposed to these same mycotoxins found in the tested grains. How does their health suffer? In his own words,

So, do you or your kids have bloody noses, menstrual problems, diarrhea, or bloating? The doctor may tell you they don’t know why, but now you are armed with new information that may explain so many things!